Issue 28, December 2021 of The European Actuary has been published.

Please visit the webpage of The European Actuary on the AAE website for prior issues or further details.

As communicated in the AAE General Assembly held on 1 October 2021, the new AAE Slogan is: advising, achieving, engaging.

Winner of the prize for the best slogan is Henning Wergen, who is a member of the ECA 2022 organising team.

Henning has generously decided to donate his prize to anyone of the members who took the effort to submit a slogan proposal.

A prize draw performed by Mária Kamenárová, chairperson of the AAE, resulted in Elina Tilta-Gerika (Latvia) to be awarded this prize. The AAE Board generously extended this prize to not only include a free ticket to ECA2022, but also to reimburse travel and hotel costs.

Elina will be contacted to make the appropriate arrangements.

Henning received a nice box of Belgian chocolate as thanks for his generous donation from Mária Kamenárová. 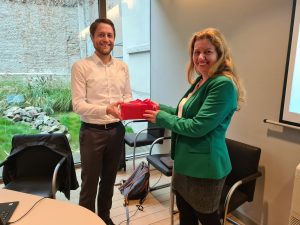 AAE submitted a response to EIOPA’s Consultation on the revision of the Guidelines on Valuation of Technical Provisions.

AAE’s submission can be found here.

AAE submitted a response to EIOPA’s Consultation on the revision of the Guidelines on Contract Boundaries.

AAE’s submission can be found here.

Desmond Tutu once wisely said that “there is only one way to eat an elephant: a bite at a time.” What he meant by this is that everything in life that seems daunting, overwhelming, and even impossible can be accomplished gradually by taking on just a little at a time.

The consequences of the current Covid-19 pandemic are huge and they dwarf most elephants. The number of human tragedies is immense although insurers seem to get along with the consequences in life and death. A different issue is business interruption where most existing policies do not cover the losses. A good question is whether it would be possible to extend business interruption cover in such a way that also situations like this would be covered.